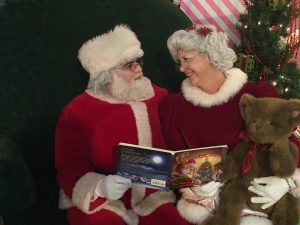 With the Christmas music playing on the radio, my daughter was laying in her hospital bed at the Strollery. A couple of nurses came into her room and they were talking about the festival of trees that they had attended last night and how Santa and Mrs. Claus were great and easy to talk to and all the kids just loved them. So I asked them about this festival of trees. They explained it to me and my daughter was listening as well.  A smile came across her face and it looked like she wanted something.

About an hour later, her doctor came in to her room. Before the doctor could get his first words out, my girl asked if she could go to the festival of trees to get a family picture taken before her operation on Monday. The Doctor paused and looked at my daughter for a second then said,” ok.”

Then he looked at me and said,” I will give her a two hour pass to go, but if she starts to feel tired or sick you come back to the hospital immediately.”  My daughter looked at me and then said,” can you call Grandma and Grandpa  to ask them to come with us, as I want to have a family Christmas picture with all of us. “

As we walked into the Shaw Conference centre and seeing all of the lights and trees that were lit up and the Christmas music that was playing in the hall made my little girl stand a little taller. As we were coming in, we saw the sign saying closed at 9 pm. I looked at my watch it was already 830 pm. I said to the family, “we may not have enough time. “My daughter then asked the ticket lady, if Mrs. Claus and Santa were still here? The ticket lady said,” yes they are, but you have to hurry because Santa sleigh was on its way here.”  The ticket lady then sent a runner to Santa’s den to get a message to our festive couple that a very special family was coming to see them. After we paid the ticket lady to get in, the runner was back to take us to Santa’s den. As we approached the den we noticed there was hardly anyone there in line to see Santa and Mrs. Claus.

Santa and Mrs. Claus were sitting on the big green chair  and both the Claus’s had great big smiles on their faces. Santa stood up and welcomed us to his den, Santa then said to us that this is how my den looks like at the north pole.  My daughter was standing behind her Dad and Grandpa, so Santa did not see her right away, but it did not take him long and Mrs. Claus to find her. Santa said,” So I hear there is a little girl here that wants to see Mrs. Claus for a family picture HO. Ho. HO.  Then we heard a laugh coming from behind her Dad and Grandpa, so the men stepped aside and a white light was beaming from the ceiling onto my daughter who was wearing a dark green velveteen dress that had white fur on the collar and cuffs at the of the sleeves and there she was, happy and smiling.  As she started to walk towards Santa, he noticed she had a back pack on, so I explained why we’re here. Santa and Mrs. Claus started to smile and the biggest HO. Ho. HO. came out of Santa I have ever heard.  So Santa placed us in his chair and surrounded all of us with presents and gave my daughter a teddy bear to hold. After the pictures were done, all the men stood up and went to the side and just us girls got a picture with Mrs. Claus.  As we were about to leave Santa then said.” We need to have one more picture with your daughter and us.”

After the pictures were done, Santa and Mrs. Claus both went down on one knee and Santa said to my daughter,” you get well my girl and I will see you and your great family on December 24, ok?” My daughter said, “ok Santa.”

Mrs. Claus told my daughter that is a date that Santa will keep.

My daughter gave them both a big hug and she asked Mrs. Claus if she could give Santa a kiss on the cheek and Mrs. Claus smiled and gave her a wink and said, “Yes my girl.” Santa did keep his date with my family and he left a note on the cookie tray saying, “Merry Christmas and I will see you next year.’ Santa.