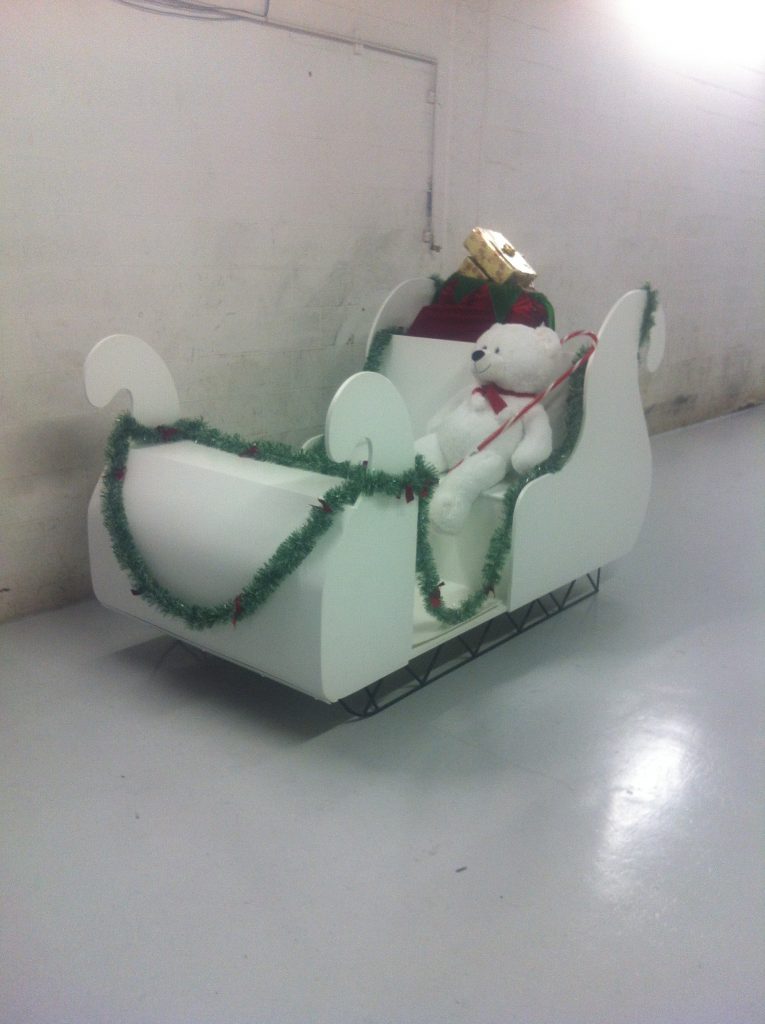 With the Christmas season now over , the elves were now taking it easy. Aunty Joe was now back home and Mrs. Claus was busy with her computer checking all of the events that Santa and her attended.  Santa decided to go down to the sled shop to look at making a new sled for Mrs. Claus. Santa knew she wanted her own sled , so she could go down to the village to do some shopping from time to time.

When he walked in to the sled office,   Jim was sitting at his desk and eating a reindeer cup cake . Jim was just about to take a sip of coffee when he noticed Santa was standing at his door . Jim stood up and welcome Santa to his office . Jim asked, “So Santa , what can I do for you?”.  Santa was busy looking at the box of reindeer cupcakes .They are a real hit . Mrs Claus only makes them after Christmas as to say thank you for all of your hard work with the Christmas that just past . Santa looked back towards Jim then replied,” Good Jim. I would like to build a new sled for Mrs. Claus so she could go in to the village from time to time for shopping, so I would like it to be strong but light weight and it has to be two Reindeer power and white in color!” Jim put his right hand behind his head and started to scratch ,then turned toward the cupboard that had some blueprints in it. As Jim was looking for that design that Santa wanted , Santa was still looking at the reindeer cupcakes. He decided to help Jim look for the blue prints for Mrs Claus new sled. After a few mins of looking , Jim found them.

As both of them looked , Santa said,” We will need to make a couple of changes here,” then pointed to a couple of  spots on the blueprints , to make it the right size for Mrs. Claus.”  Jim agreed with Santa. Santa then shook Jim’s hand and then asked when would the new sled  be ready? Jim replied, “In three or four days Santa.” Santa then started to smile and said “bye Jim “and left the shop.

As Santa was walking back to the castle,  he stopped to watch some elves having a snow ball fight. As Santa was about to leave to meet up with Mrs Claus , the elves decided to have some fun.  Santa felt something hit the back of his coat and belt all at the same time and Santa thought,oh ok , its on now. Mrs. Claus was coming out of the castle and she witnessed the snowballs hitting Santa .She hit the snow a running , she was not going to miss a good snow ball fight. She  got in behind the elves that were throwing snow balls at Santa. Santa started to laugh and he bent down and grabbed some snow and made a perfect snow ball. After a few minutes the snow ball fight ended and yes the Clauses won.  As the Clauses were helping the elves up and making sure they were fine ,they decided they would go for a walk and see how everyone was and how their Christmas went.

Jingles came running up to Santa and Mrs Claus. He had a message for Santa . Jingles then stopped right in front of Santa and asked him to bend down as he had a message from Jim. So Santa bent down on one knee to hear the message , Mrs Claus also bend down to hear the message ,but it was a very short . Santa then stood back up and looked at his wife and said” Well my dear , I have to go and see Jim for a few minutes, it should not take long.” Santa whispered  in her ear a special message .She looked at him and  replied,” I will see you later Santa . “

Santa could hear the elves working hard on Mrs. Claus sled . They  already had the panels cut out and were about to put it together. Santa was impressed on how fast Jim and his elves worked. Santa was about to ask Jim where are the runner’s for the sled when  Jim pointed to the shop across the street. Santa looked through the window and he could see some short blue flashes of light. Santa knew that the elves in the welding shop were finishing up the runners . Santa looked at Jim and said  “what do you need? “Jim replied to Santa, “The sled will be ready tonight and we can have it in the reindeer barn after 5 pm . “Santa replied, ” that’s great news!” Santa had a smile on his face .He wanted to give Mrs Claus a new sled for awhile. Well Santa said good bye to Jim and wil see you in the reindeer barn at 5 pm with Mrs. Claus. Santa headed back to the castle . He felt like a young man that had just bought a horse and buggy for his wife at the local black smith shop.

Jingles tugged on Santa coat then said, “We have to head for the toy shop now Santa, to say thank-you and have some hot chocolate and that new desert that Mrs. Claus made for everyone , Snowman cup cakes , then we can head to the new appointment you just made   for Mrs. Claus new ride.” Santa just nodded and said good bye to Jim and I will see you later, as they both headed for the Toy Factory .All of the elves were heading the same direction as Santa.

As Santa was about to climb the stairs to the toy shop ,he heard his name being call from his loving wife Mrs Claus, so Santa waited for her .He put out his arm and helped her up the stairs and at the    top of the stairs Santa held the door open for her .The  clock in the town square chimed , it was now 3 pm in the afternoon . Santa looked back at it and started to smile. As the Clauses both walked into the large Toy Factory, there was a thundering sound of Ovation of clapping & cheers coming from the elves and at that moment the overhead doors opened just high enough for Mrs. Claus bakers and the Hot Chocolate makers to come into the toy factory so Mrs Claus could  pass out the cupcakes and Santa could pour the hot chocolate , saying thank you for the help they gave through out the year . As the event was coming to the end, Jingles came and tugged on Santa coat again to let him know that everything was ready .This little piece of news put a smile on Santa’s face.

As the last cupcake and cup of hot chocolate was being handed out the clock in the town square rang 5 times . Santa went over to Mrs. Claus to let her know that we have another event to attend . Mrs Claus looked at Santa as to say, what another event do we have to attend? Santa then put out his right arm and Mrs. Claus put in her left arm and off to their next event . Mrs Claus asked Santa,” What is our next event?” Santa replied,” We have to go to the reindeer barn for a few minutes because there is a new reindeer about to be born”. Mrs Claus like to see a new birth now and then.As they approached the front of the barn, a reporter from the Aunty Joe’s Christmas newspaper was there to take pictures of the new arrival and get a story as well for the next edition. As the Clauses entered  the barn, Mrs Claus looked to see a bright white sled sitting in the white room .She was speechless and looked over at Santa and Jim who was standing next to Santa.

Santa then said,” Here is your very own sled my dear , I hope you enjoy flying her .She is a 2 reindeer power sled . Mrs Claus was still speechless . The tears started to come down her cheeks and she was happy. Two  of Santa’s elves brought Dancer and Prancer out and hooked them to the brand new sled .After the two were hooked to the sled , Santa helped  Mrs Claus in and handed her the reins .Santa was about to hook up his seat belt when Mrs Claus yelled ,”On Dancer, On Prancer “and she snapped the reins , and in a moments notice ,the two reindeers were off and gaining speed .

Santa head snapped back and his body got pushed into the seat of the sled .Mrs Claus snapped the reins once again to make the reindeer go faster. Santa was hanging onto his hat  and the front of the sled with one hand. Mrs Claus was trying to level off , but the sled was going up and down. Mrs. Claus was having fun learning how to fly her new sled .Santa yelled ,”pull up ,your heading for the castle .” Mrs Claus pulled back on the reins and up the sled went , but she pulled back just a little to far and to the left , her and the reindeer and Santa were doing a barrel roll. There was a loud scratching noise coming from the bottom of the sled as the runner’s were scraping on the side of the castle. Mrs Claus pulled the reins to the right and as she was coming out of the roll , Santa said ,”we need to go back Mrs Claus ,we need to get you some none flying reindeer for now .”So Mrs. Claus headed back to the barn with her new sled , but she wanted to make a full circle around  Santa Village .After she made the fly by , she headed for the barn and made a nice soft landing , and the reindeer walked into the barn. Santa did not look well , as the elves help him out of the sled .Mrs. Claus was ready to go for another ride ,but it was getting dark .She  would have to wait till tomorrow. She walked over and helped the elves with Santa to bring him back to the castle .Mrs. Claus said ,”thank you Santa for my own sled,” and gave him a big hug and a kiss on the cheek.